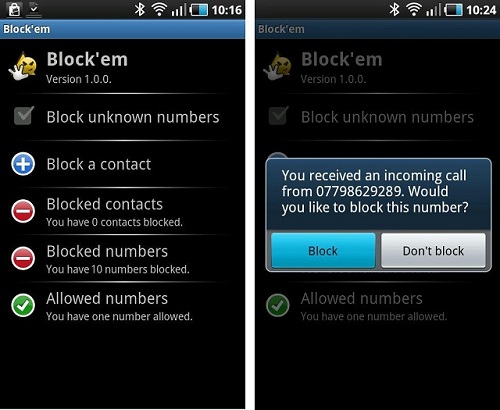 Before the internet, Facebook and mobile phones bullying was something that usually took place in the school yard and while still horrible there would usually be someone around to help.

Now however, with the world – and you – available 24/7 at the click of a button on your phone, bullies have a way of reaching you when you least expect it in the privacy of your own home.

So what can you do if a seemingly nice friendship suddenly turns sour and you are left feeling harassed with no escape?

The new easy-to-use Block’em app allows people to block out unwanted calls and texts without the hassle of having to change their number. And to avoid further confrontation, the person will not know they have been blocked leaving you with the upper hand.

Block’em is available from the Android App store for only £1.79, with 70% from every purchase going direct to the NSPCC.

Helen Perry, founder of Block’em, said: “Block’em will not stop the playground bullies, but it will stop them from coming home with you. Block’em gives young people the control and confidence to put a stop to bullying via mobile phones in a non-confrontational way.”

“We all know how hard it is to ignore a text, even when you know it’s not going to be nice, but Block’em simply removes the temptation by stopping unwanted calls and texts. The Block’em App is about empowering young people who are feeling harassed but we’d still urge youngsters to talk to an adult if they’re being bullied in any way.”

For more information about how to stop them with Block’em visit their Facebook page or www.blockem.co.uk.

One thought on “Block'em app launches to fight cyber bullying”