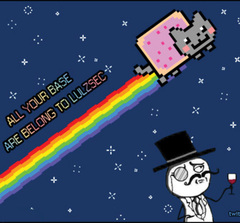 The 19 year old Essex boy who has been arrested by the British police on the request of the FBI has been embroiled in hacker feuds before.

Ryan Cleary of Wickford Essex has been taken into a London police station for questioning about cyber crime. The police will want to talk about the huge hack of Sony earlier this year, attacks on the CIA and a possible though unconfirmed hack of UK Census data in past few days.

So far the group believed to be behind the attacks – LulzSec have denied that Cleary is anything to do with them. They said on their official Twitter:

“Seems the glorious leader of LulzSec got arrested, it’s all over now… wait… we’re all still here!”

Other places, state that he is associated with them and helps to moderate message boards for them.

It could be that Cleary has been turned over to the police by a rival hacker for upsetting other people in the hacking community. Looks like he did that a lot. He was fingered out by Anonymous in May 2011 for bad behaviour, and his personal details were published on a webpage by Anonymous as punishment for trying to force a change in the group’s direction. Something that it seems he had been guilty of before back in 2008 when he was only 16, for attempting a DDos attack on Fourchan, the hackers’ message boards site.

Even if Cleary isn’t directly connected to LulzSec or Anonymous, the group’s philosophy encourages other people to take part. So it’s possible he or someone else could have acted separately to these main groups…

LulzSec in partnership with Anonymous have declared a widespread operation against governments called #AntiSec. This statement was put in pastebin, and has been tweeted by the official LulzSec account so we believe it to be genuine:

“Top priority is to steal and leak any classified government information, including email spools and documentation. Prime targets are banks and other high-ranking establishments. If they try to censor our progress, we will obliterate the censor with cannonfire anointed with lizard blood.”

This is going to be great.

Looks like Cleary, was already guilty of pissing off Anonymous – which led to the spill of his personal details onto the internet