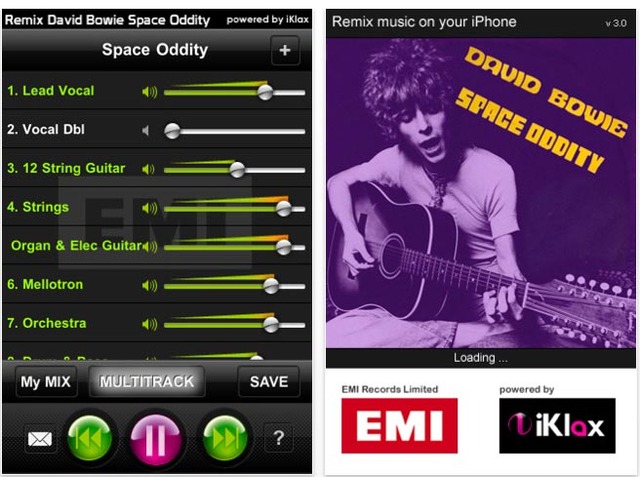 Another interesting music-app crossover today, following swiftly on from our geolocated album app story the other day.

David Bowie – yes the David Bowie – has just re-released Golden Years an old track from 36 years ago – as an app. More than just the track, the app comes with editing software and the music has been chopped up into various parts: Bowie’s vocals; backing vocals; the 12-string guitar; guitar; bass; drums; harmonium and percussion. We have to say that the editing software isn’t the most fully featured out there.. it just really lets you push the volume up and down on any given track. Still, you know, probably more creative than just playing Angry Birds..

He’s done it before – with a remix app for Space Oddity – Remix David Bowie: Space Oddity, available for 1.99 on iTunes.

The Golden Years app will be out on 6th June.

If you want some more creative control over the remix – you’re best off downloading the parts to your computer and playing around with them on there.

For more musical experimentation we like this DJ app – EasyMix and of course there’s Apple’s Garage Band if you want to simulate a whole band effect on your iPad..

Who knows where music begins and apps end any more..?