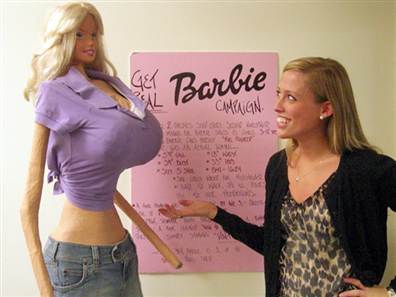 Every so often someone wonders what a barbie would look like scaled up to real human size – the answer: pretty wrong.

It’s an informative exercise in feminism and the body image that we’re giving to little girls. According to some BBC research, a real life Barbie with a normal size 10 waist would be huge, 2 inches shorter than the world’s tallest woman and would have a bust size of 37inches.

The BBC did a mock-up on a photoshopped human but a model produced by an American artist who has just been interviewed on MSBNC does a better job of showing how gruesome barbie would be if she scaled the proportions up to a natural human height. That’s it above, with the creator Galia Slayen.

The artist has admitted that the figure isn’t 100% correct which is a pity, I’d actually like to see one that was. But she maintains that it is valid extension of what Barbie would like, big.

“It’s a shocking image. A lot of people have seen it, and it’s started debates,” she said, particularly after she wrote about it for the Huffington Post. “Her proportions are not 100 percent correct, but her look is not invalid.”

Mattel, the makers of Barbie, say that the doll was never meant to be realistic…