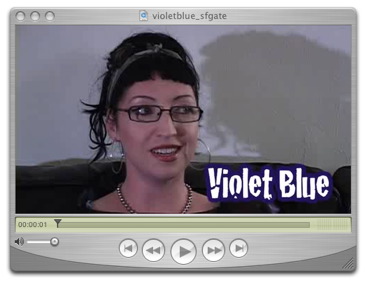 More evidence that geeks really are different from normals comes from the South by SouthWest festival where sex blogger Violet Blue gave a presentation on ‘How to have Sex with Geeks’.

Because it’s not the same as having sex with normal people. Apparently.

Violet Blue (beloved by us for her role in one of the few sex scandals to grace the tech world – a rumoured liason with Xeni Jardin of Boing Boing) told listeners that:

Therefore they (the geeks) need to be decoded before you can make sweet love to them. The talk furnished its audience with a range of helpful chat-up lines such as: “Mac or PC, or both? Come to think of it, that ‘sounds a little dirty.'”

See the way the sentence seamlessly moves from technical matters to sex. That’s what we’re talking about. Other tips for the listening geeks included not tweeting about your sexual conquests, a list of Do’s and Don’ts for picking up on geeks and Sex etiquette and social media. Some tips were specifically for the conference-goers: including how to have a hot time without pissing off your hotel roommate

Violet Blue’s tone was generally positive, she rounds up with a discussion of why geeks are better lovers. Sure we knew that already. Once you pry their fingers off their iPhones it’s all go. But nice to have it confirmed at SXSW..