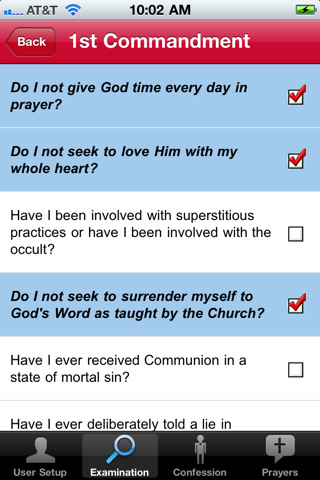 Catholic church officials were quite keen on the idea of a confession app, taking the stance that it could bring more into the fold. But the Pope has other ideas, it seems.

‘It’s essential to understand that the sacrament of penance requires a personal dialogue between the penitent and the confessor, and absolution by the confessor who is present, Father Federico Lombardi told reporters. ‘This is something that cannot be replaced by any application. One cannot speak of a confession via iPhone.’

Having said that, the Vatican has been quite open to the idea of spreading the word of God over as many channels as possible. ‘The voice of the divine word must also resonate over the radio, internet channels with virtual online distribution, CDs, DVDs, iPods, and on television and cinema screens,’ the Vatican has said in an official statement.

The app lets users create password-protected profiles, before asking a series of questions to determine their purity. The app also comes with a series of prayers, including classics like the Lord’s Prayer and Hail Mary. But it’s not real confession, mind – you’ll need a priest for that. Just so we’re clear.