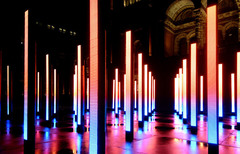 It boasts some beautiful buildings, possibly the best art gallery in Europe and has gifted the world some of its most infamous politicians and writers. But these days St Petersburg is also becoming known for its art and technology scenes too. The city is the birthplace of Yota, a Russian network which delivers incredibly quick wireless data speeds to its customers PCs and mobiles using innovative 4G technology, which is way beyond anything we currently have in the UK. St Petersburg also boasts a small but growing digital arts community which focuses on technology to create exciting, meaningful but very high tech installations.

This week the two communities came together as Yota hosted Yota Space, a digital arts festival which was fantastic in both its ambition and execution. The company took over a huge disused hypermarket – think Selfridges scale – to deliver a festival of bands, Djs and most of all art installations. UK electro pop band Hot Chip kicked the festival off on Sunday, but in many ways the main story was the large number of cutting edge installations from artists across the world.

Digital Technology is starting to have a profound impact on the way that art is created, distributed and even funded, and I’ll take a longer look on how in many ways art may follow a similar path to music and media in the way it evolves later this week. Here though is a quick trawl through some of the highlights of the festival.

The day before the show Drive Productions took one of the city’s most impressive buildings – the Mikhailovsky Palace – and transformed it by using a 4D projection mapping system. We have seen this kind of thing before in the UK, but not delivered in quite the way that this was.

If you have never checked out the onedotzero website you really should – it is a fascinating place. The group is arguably the UK’s leading moving image and digital arts organisation. It basically commissions, showcases and promotes all kinds of digital and interactive arts. It works in interesting ways too with artists asked to submit a video of their work to the site. The company regularly hosts a festival of new and upcoming artists and in St Petersburg offered Russian arts lovers the chance to see some recent and classic works by its associated artists. 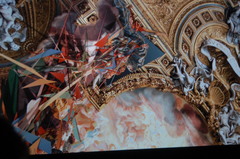 Among the highlights were Toplogies by an group called Quayola which cleverly uses a multi screen installation with a pre-modernist painting but then adds a series of formations which emerge to create a clash between the stillness of the original image and the dynamic nature of the emerging images.

Another key feature was an installation from Korean based artist Joon Y Moon. His work Augmented Shadow is a high tech version of the old shadow table concept. Imaginary objects and organic beings can be manipulated by the user to create different life cycles for the objects. Watch the video to see it in action, and look out for the trees and the birds.

One installation that might be familiar to Londoners is Volume by United Visual Artists. The work has already been showcased on the South Bank and at the V&A museum in the Madjeski Garden. Its creators bill Volume as a sculpture of light and sound which is controlled by people’s interaction. As a person moves through the space they trigger a display of light and sound. It is an incredible experience to wander through the installation and fascinating to see how user’s constantly chnage its land and sounds scapes.

Also at the show were installations from Jason Bruges (who I’ll write more about in separate feature as he has some amazing projects on the go), Brian Eno’s 77 Million Paintings and this work, Body paint. from MSA Visual’s Mehmet Akten where users can create abstract painting by moving in front of the installation.