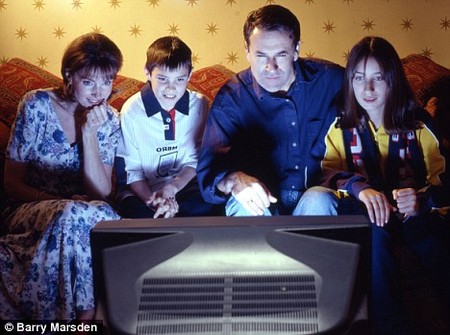 Samsung tried to get us all excited about the potential of apps on TV today. And to extent they succeeded.

The iPlayer app looks great, LoveFilm and music video site Muzu.com will be excellent. But what all those apps have in common is that they offer content that was always intended for TV in an easy-to-manage format. They’re just like better-organised television.

But beyond that, I’m still not convinced about the need for other apps on the Television. I just don’t see how things like SuDoku or even Facebook will be improved by having them up on the big screen.

In an attempt to prove how TV apps and the web-enabled Smart TV will work their way into our everyday lives John Green from Samsung talked us through a day in the life of the Smiths, a family with 2.4 kids and a Samsung-manufactured Smart TV.

To me this presentation raised more questions than it answered. In fact, rather than selling a new enhanced lifestyle it uncovered 18 hours of an almost nihilistically banal existence.

This was largely the fault of the presenter – who wasn’t exactly Steve Jobs – and heaved deep sighs in between every new description of what the Smiths got up to in their daily life and sounded more like he needed Prozac than any thing the Samsung app store could offer him.

I’m digressing, but here’s how it goes… my notes in square brackets.

– Mr Smith likes to see what the weather is when he gets up 7am. He wants to see the weather in London.. [pause] and in Paris. [sigh]
[The presenter clicks through several menu options to add the city of Paris to the weather app. Nice, but I’m not wowed by the amount of clicking required to get the info you want..]

– Then Mr Smith looks at Google Maps and leaves for work. Mrs Smith has the day off so does a Sudoku puzzle at 11am in her coffee break.
[I’m too jaded these days to expect positive gender stereotyping from tech companies, so lets just accept that Mrs Smith does indeed get days off work, and does spend those days playing number games. Would she really want to do them on a TV app though?]

– The teenage daughter gets back from school. After school she goes to the TV because she “likes watching Facebook with her friends”.
[I’m not convinced about social networking on TV screens and the use of the word “watching” only confirmed my doubts about it. You never “watch” Facebook, you go on it to chat and check messages and for that you want a keyboard. Also – Facebook on the big screen? Would you want your chat with your friend splayed across 65 inches? What if mum walks into the room. I just don’t think this big screen idea works for personal platforms like Facebook.]

– And so the day moves on… the boy plays a bowling game, Ms Smith looks at a picture of pier on the Picasa app, reads comments on the picture of a pier and translates one of the comments that is not in English, into English. Then she looks at a slideshow of pictures of flowers.

– Mr Smith comes home and watches Masterchef on iPlayer.
[well, this all sounds a bit better – but iPlayer on TV has always sounded great

In conclusion – I’m not thrilled by the possibilities here at all. Of course the conference was all about asking developers to get creative and make the apps that will make this platform stand out. In the meantime, the choice of TV programes sound good, but I still need to be inspired by this.