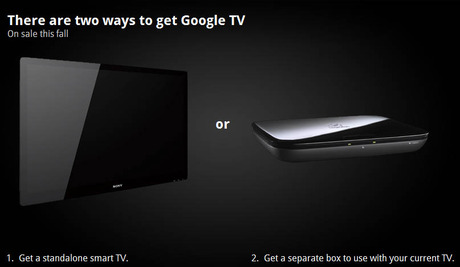 Google TV was announced open on Monday promising a brave new world of content on demand, full-screen YouTube and apps for TV. Key to the appeal of the idea is the simple plug-and-play box that will bring full internet functionality to a normal TV.

The Google TV box is manufactured by Logitech and as they put it.. it “makes it easy to get the full experience of Google TV”. Sounds great right? but some journalists over at Cult of Mac who had the opportunity to play around on it, claim that it really isn’t as easy as it sounds.

In fact, they say it’s actually fiddly, geeky and doesn’t look destined for mass appeal. And when it comes to selling something for TV, that’s actually a big problem.

With smartphone or say gaming controls, it’s not so critical if set-ups are difficult because there you have a bunch of more determined, tech-savvy people. With internet on TV it’s more of a problem because this is aimed at the masses – the TV-owning non-geeks who want to flick it on and fall on the sofa. A complicated interface and set up could put them off the idea from the get-go.

You get more punch for your money: the Logitech runs Anroid, connects to satellite and cable TV as well as all video on the web. You can search using your voice and even turn your smartphone into a remote control, oh yes and there are apps and HD video conferencing.

Still, says Leander Kahney, “It’s overly complicated. It’s less of a TV-watching device than a mini-computer for the living room.” The TV remote is like a keyboard – just a little more complicated than you want when you slump on the sofa – see a picture of the accessories below…

And having search as the centre of the TV watching experience requires just a little too much active thought in his opinion.

Okay – it’s not very surprising that Cult of Mac has come down on the side of the $99 Apple product over the $299 Google one. But till we get a chance to try them both out, we’re pretty convinced by his arguments…

Tech companies still have quite a long way to go to get people to understand what internet on TV is and why we’d want it. And they’ll have to keep the easy to use instant gratification nature of TV strong when designing the user interfaces…