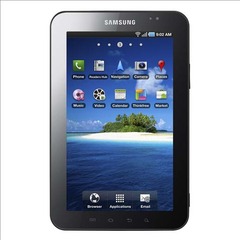 iPad rival – the Samsung Galaxy Tab – showcased at IFA will go on sale with Three in the UK. The Galaxy Tab is a fast Android Tablet with the kitchen sink thrown in – flash support, front and back facing cameras all running on a very fast 1.2GHz chip. Our reviewer, Ashley actually preferred it to the iPad.

Three are famous for well-priced contracts but dodgy coverage. They have been forward in supplying 3G internet to wireless devices beyond mobile phones so jumping into a partnership with the hot Android tablet of the minute is a good move for them.

Nigel Field, Director of Devices at Three said, “With both the Android and tablet markets going from strength to strength, we’re proud to be ranging the Samsung GALAXY Tab. More than 97% of Three traffic over the network is data, so more than ever consumers need to make sure they’re on a network that can cope with the demand when buying mobile Internet devices like tablets. With both SIM and Wi-Fi connectivity, Samsung GALAXY Tab users on Three can get the most out of the product knowing they’re with the UK’s number one mobile broadband provider.”

Data customers are able to make calls and send text with their data SIM at 10p per text, 10p to call Three mobile or landlines and 25p to other networks.