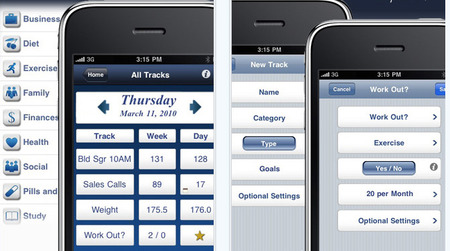 If there’s one thing people like finding out about, it’s themselves. So iPhone app TrakIt is probably onto a winner with their tracking yourself app.

It doesn’t really do very much apart from provide a format for you to track things in: helping you help yourself, you know.

Describing itself as a “unique Goal Setting and Daily Tracking app”, TrakIt says that they
“enable users to track anything on a daily basis: Sales calls, blood sugar, pill taking, their weight, stock prices, billable hours, miles run, whether they worked out or not, or anything else they would like to track. Users can also take notes, set goals, and quickly see how they’re performing in relation to those goals.”

Obviously that is most useful if you have some particular area you want to improve on and certain goals you want to achieve. Like with a lot of stuff it’s down to how much effort you put in. Do you remember to record stuff?

Features of the app that make it useful include the ability to track anything. Other apps tend to focus on particular things like weight loss. There are three ways to input data – you can either input numbers (calls made a day); yes/no data (did you go for a run?); or an average (what was your weight?). Your progress and goals can displayed visually in a graph, and the app also generates an automatic To-Do list which can buzz you with reminders – “eat a carrot!”, stop looking at !icanhascheezburger!”.

It’s part of a broader trend of tracking ourselves, taken to a sort of extreme by the people in a New York Times article on self-measurement… Something that has increased a lot with smartphones because of the convenience of updating something that is always available.