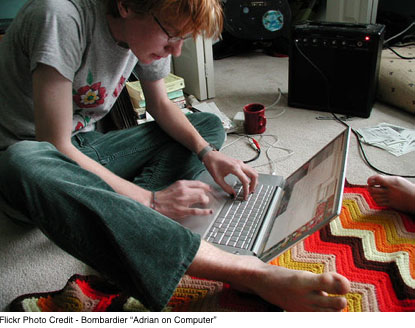 It’s probably not news to you that students spend a lot of time bumbling around on the internet looking up weird stuff and chatting to each other on Facebook. Some statistics out today show just how much they’re doing it. Time spent on social-networking sites adds up to be the equivalent of a full day’s work at 7.5 hours a week. That doesn’t include time spent on the internet doing other things – 13 hours, or time spent on iPhones or Blackberrys – for which there are no statistics.

It seems that a smartphone is now more of a student essential than a television, and that many people are watching films on TV.

The data comes from a survey by consumer review site Reevoo.com.

· Students are spending the equivalent of a full working day (7.5 hours) on social networking sites every week

· Undergraduates spend more than 13 hours surfing the internet, three and a half hours shopping online and watch an average of two films a week on laptops

· Almost two thirds (61%) of students say sites such as Facebook are the main cause of distraction from their studies, topping hangovers and student-favourite daytime TV

Well if they want to grow up to be social media experts – they are probably doing the right thing. If they want to be doctors, then can somebody please take the computer away from them and let them back to looking at books about how the human body works.