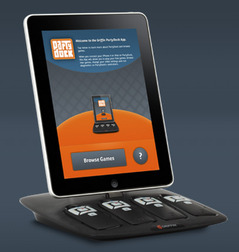 iPads are quite personal devices – they’re about the size where it’s hard to comfortably share it with anyone – and if we remember correctly, iPad owners tend to be part of a selfish elite who are reluctant to share anyway..

However, gadget accessory makers Griffin have just invented a dock which could well get that selfish elite sharing their darling device with up to 3 other people.

Yes, the Party Dock (also works for iPhone 4) is a media and game dock. It comes with four remote controllers which will let you play games specially designed for the PartyDock platform (general games won’t work unfortunately). Otherwise it works a little like a charging stand – rejuicing your iPad’s battery while propping the screen up and letting you watch movies or play music.

It claims to be good for music so there must be speakers.

Griffin are better known for more low-tech accessories, cases and so on. But accessories are getting increasingly more complex, so sensibly they’re up there competing in that field now.

They’re putting out a call for developers to help them make games for the platform..

Griffin are being a bit cagey about the details but you can see more on the website they’ve set up specially for it: www.griffinpartydock.com/