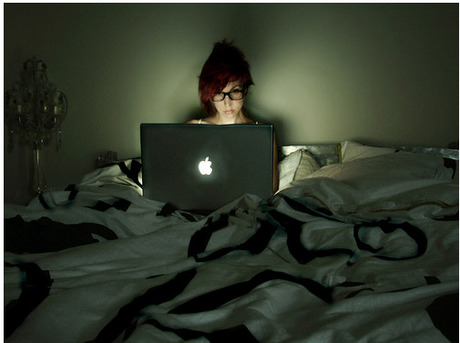 Are you one of those people who stays up till 2am of a weekday night tinkering with your FTP client, backing up your iPhone or just compulsively watching the Old Spice adverts on Youtube?

Well, you’re probably not very healthy, maybe you’re single and suffer from eyestrain… but you could be more intelligent than those Johnny-go-to-bed-early sorts who go to bed in good time, get up at the crack of dawn and then are all smug about being able to function at 9am in the morning.

Yes, apparently staying up late – being a night owl rather than a lark – is a sign of intelligence. That’s because humans since prehistory have been naturally wired to get up at daybreak and sleep at dusk and being able to override those natural impulses is an evolutionary advantage. In a world where we can just switch a light on, there’s no reason to go to bed at sun-down. Um, in the words of Psychology Today:

“Satoshi Kanazawa, a psychologist at The London School of Economics and Political Science, argues that, while we have specialized mental modules for navigation, social interaction, and other age-old tasks, general intelligence is its own module handling only evolutionarily novel circumstances. And he has data showing that people with higher IQs are more likely to have values and preferences that just didn’t make sense for our ancestors to embrace. One of those is staying up late.”

Bedtimes and wake-up times for Americans in their 20s by IQ.