Nokia’s cheap cheerful, social-networking C3 will be available on the Nokia UK online shop sim free for £109 from 18th June 2010.

Built a little like a Blackberry with a QWERTY keyboard, a tracker pad and a widget-filled screen, the C3 is billed as an affordable smartphone aimed a younger audience.

A 2mega-pixel camera probably won’t take incredible images but it can post directly to the web. It comes in a range of bright colours: hot pink, golden white and slate black.

The Nokia C3 will be available exclusively for one month from Vodafone on 22nd June 2010, with O2, The Carphone Warehouse and Phones4u stocking the phone in August. 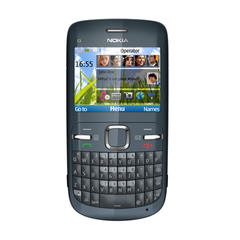 Nokia C3, available to preorder for £109 sim-free from the Nokia shop