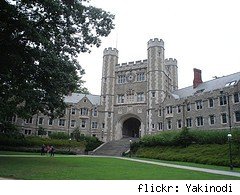 Things that get banned on university campuses are usually illegal: booze, drugs and so on, stuff that messes with the law. But Ivy League school Princeton has chosen to ban or least regulate the iPad for interefering with something probably more important – the wifi network.

Princeton have realised that as the iPads connect to the internet, the iPad causes DHCP client malfunctions, meaning it interferes with other devices using the school’s wireless network.

As of the 18th April it had affected 25 of 41 devices on campus – a ratio that doesn’t bode well for the general population. Though the bug could be fixed by an update to the iPhone/iPad OS.

In the meantime, it’s a connection issue that can be resolved by disconnecting the iPad from the wireless network or switching it fully off and on between uses.

Basically iPads are retaining the temporary IP addresses allocated to them by the network beyond the time they have permission to. AppleInsider explains the flaw:

“An IP address is assigned through a method known as Dynamic Host Configuration Protocol (DHCP), and these addresses can dynamically change over time on a private network as devices disconnect and reconnect.

“A DHCP client, such as an iPad, will “lease” a unique IP address to a device on a network for a set period of time. Once that time has elapsed, the DHCP client asks the server to renew that lease. Apple’s iPad, however, does not go through that renewal..”