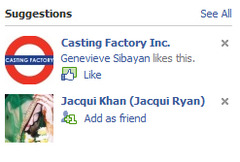 We’re all aware that Facebook knows a whole lot of information about us, who we are friends with and what we do. But mostly, Facebook’s been very careful about what it does with that information and where Google Buzz slipped up by integrating email contacts a bit too closely with the social network, Facebook has avoided major scandals.

Anyway thanks to a little poking around (aka investigative journalism) it looks like one of those scandals has popped up – and it’s over the same issue: where email contacts meet social networks. It seems that a)Facebook accesses your email contacts whether you want it to or not; and b)Facebook uses what it finds there to reccomend people to you and to people who know you.

The fuss focusses on the Suggestions Box on the right-hand side of the Facebook home page and how those suggestions are generated. The suggestions box has come under fire before for making inappropriate recommendations – suggesting people “send a message” to friends who have died or “re-connect” with members of their family or husbands or wives.

Journalism.co.uk says that the Suggestions Box uses information obtained from your email account without your permission, it also generates recommendations from your friend’s friends and your friends email accounts. The article focusses on why that’s bad for journalists:
“You may have countless reasons why you don’t want to be publicly connected with people in your contacts file. People in that file may be professional contacts, confidential sources, business associates or even the target of a long-running investigation; people from whom you may want to keep a discreet distance for any number of reasons.”

Think about it – you may have been surprised to see some people turning up in that suggestions box.

For most people for the meantime the worst it could cause is some embarrassment, but it’s interesting to have the mechanism out in the open.