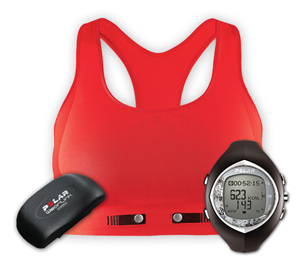 Would you uh want your underwear hooked up to the internet? You may think the question will never arise, but IT ALREADY HAS. A scenario where t-shirts, coats, pants and bras are all connected up to the internet has already been postulated by ReadWriteWeb which sees a bright future in internet-ennabled clothes.

It’s part of ReadWriteWeb’s interest in the Internet of Things, whereby all sorts of inanimate objects get extra functionality by connecting up to the internetz.

Shall we home in on the Heart-Rate Detecting Bra? Yes, let’s. From Numetrex, it uses electrodes to detect the wearer’s heart-rate and then transmits the data to a watch worn on the wrist.

“Our heart rate monitor sports bra makes a great gift from the heart, for the heart,” says NuMetrex Marketing Director Meg Burich. “It’s a comfortable way to wear a heart rate monitor, because we knit flexible heart sensing fibers directly into the fabric of the garment. There’s no hard plastic belt to strap around your chest.”

Okay so this particular device is only useful if you want to measure your own heart rate, but surely there are other interesting things we could do with internet-enabled underwear. I hardly dare to ask for suggestions as to what, so in the meantime I’ll tell you quickly about my other favourite, the proximity-sensing t-shirt from Think Geek, best illustrated by a youtube clip.

NB: the first item in RWW’s article is “Motion-Detecting Pants”, and they wrote this sentence describing it: “Now, we’re know what you’re thinking – it’s already pretty easy to detect ‘motion’ in pants isn’t it.”

For one horrible moment I thought they were making a joke about erections. No RWW, no! Then I remembered that in American “pants” means “trousers” – phew, they were just talking about when you go for a walk and your trousers move because you’re moving. It all makes sense.