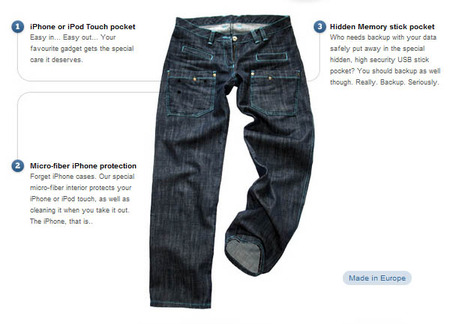 Some geeks with an eye for jeans design have created a new niche for geek jeans. Called WTF jeans, strapline “wear them FTW”, they’ve caught the attention of the denim-wearing geekerati.

If there’s anything to get geeks excited it’s a limited sale. There’s a version for the gents and ladies, in a similar loose style I’d call it “boyfriend jean” style. The turquoise stitching is a genuine “Twitter blue” and other noticeable feature are front pockets for easy gadget access.

It’s all about easy-access gadgets:
“the perfect pair of jeans for people that don’t go anywhere without their mobile phones and gadgets. When I put my iPhone in my pocket, I don’t want to spend half an hour to take it out! The pockets of WTFJeans? Gadget-friendly! Isn’t that just l33t? ;)”

Set up by a geeky couple in France, they are pretty stunned by the success. From their blog:

“We are just a simple internet-addicted couple who wanted to make just a 2 pairs of jeans for ourselves, and after a few friends said they’d like a pair too, we decided to make a web shop and try to sell 1000 pairs of it. We have never expected anything like this to happen! :).”