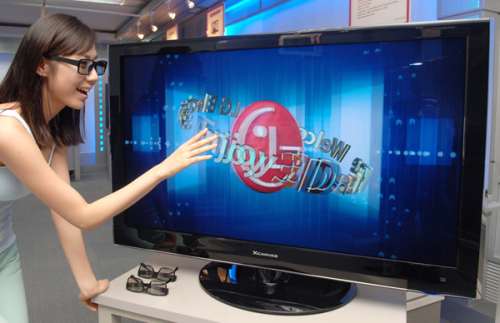 LG have today announced they will release a 47-inch 3D TV, the tantalizingly titled LD950, during May.

The LCD screen uses LG’s passive 3D technology and will work with Sky’s upcoming 3DHD and 3D Blu-ray players. You will also be able to watch standard and HD content as you would normally.

Passive technology means that you’ll have to use polarized glasses, as opposed to the slightly more modern shutter glasses which require active screen technology to work.

Though LG have announced that they will be launching an LED TV utilizing active screen technology alongside the 47-inch behemoth, but as yet there is no word on size.

LG bloke Stephen Gater said: “With these two new 3D TV models, we are bringing an even better 3D offer to market this spring and hope to provide even more consumers with the excitement and thrill of the 3D cinematic experience into the comfort of their living rooms.”

LG are aiming high in the 3D market, and intend to be offering 3D screens up to 150 inches in the very near future.