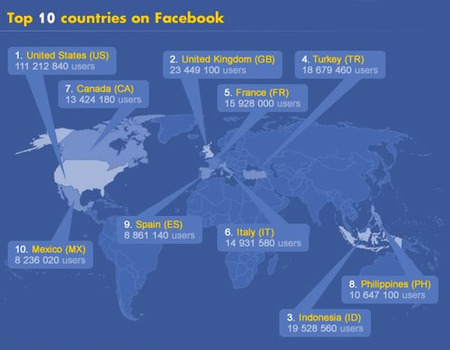 Research from website-monitoring.com showed up some pretty stunning figures for Facebook visitors. Facebook has 400million active members half of whom sign in every day and spend an average time of 55 minutes browsing the site. They also ranked countries by number of Facebook users. And though the USA was predictably first – the UK was an impressive second, especially considering the UK’s much smaller population. See graphic above.

We divided the number of facebook users in each of the countries by the total population of each of those countries to get an idea of Facebook’s penetration. A stunning 40% of Canadians have Facebook profiles, while the 38% of Brits do. In America the figure is 36%.

It’s not entirely surprising Canadians are keen Facebookers, they are one of the most wired countries in the world with 84.3% of the total population online (according to Wikipedia)

In the UK 76.4 % of people use the internet according to World Internet Stats.

One thought on “Facebook penetration: a whopping 40% in Canada – with UK a close second”