LED streetlights are a eco-techie’s dream – they use less energy, need to be replaced less often and produce more light than old ones.

Thing is that the “produce more light” bit is proving to be a bit of a problem for people on streets blessed with these devices. Admiral Anika on FriendFeed lives in LA where the local government has installed the LED streetlights. This is what her street looks like at night-time: 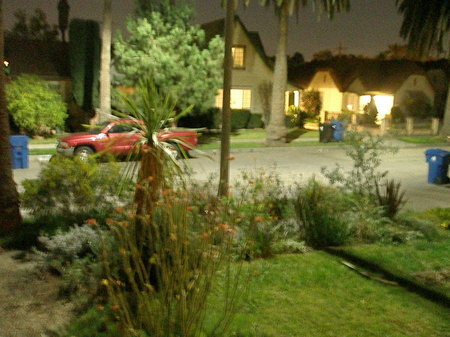 Looks like a movie set doesn’t it? And as you can imagine that it takes more than standard curtains to keep that warm yellow glow out.

The advantages of LED lights are still strong. The manufacturers BridgeLux gave an interview on Building43
“Twenty percent of the world’s electricity is used for lighting, LEDs would drop that by 75 percent if we replaced [traditional light bulbs],” said Bill Watkins, CEO of BridgeLux.

Pretty amazing. Following comments on FriendFeed, it does appear that LED lights give off a cooler colour – more blue than the older orangey sodium lights, and that this can make them seem brighter because the human eye perceives different colours differently. “The new LED lights are much cooler (more blue) and are probably have a wider spectrum. So even if the old and new lights gave off the same number of lumins, they might not appear the same brightness. Human vision sensitivity is not flat across the entire spectrum.” Jeff P. Henderson informs us.

Other issues that come up with super bright lighting seem to include darker patches, making it hard to see comparatively darker areas that were previously lit by more diffuse light.