Kudos to Facebook for continuing to innovate. The homepage of Facebook’s 350 million users has just undergone a big front-end update that forefronts what’s new and makes it just that bit harder to log out (two clicks not one now). It pushes Facebook marketplace to the front, tidies apps up in a list, makes you check your message inbox more than you used to, cause it comes up with that little red bubble now that’s really hard to ignore… and makes chat a bigger feature, now you can see more easily whose online. 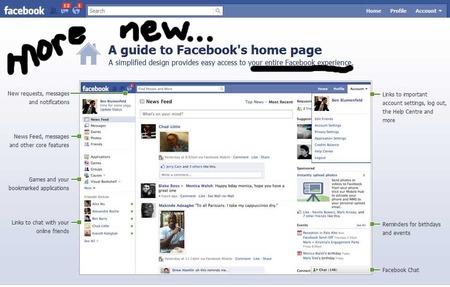 Overall it’s a more complicated homepage – a multifuncition dashboard, as opposed to “the news feed” and a few notifications – but it does push some of Facebook’s lesser known but good features to the front: Marketplace for example (now a viable alternative to eBay/Gumtree/Craigslist etc) As Facebook put it “easy access to your whole Facebook experience”.

Other pages highlight the new features in them. The friends pages makes Facebook friend grouping easier (you know you can organise your friends into lists like on Twitter right?) It lets you organise privacy better, restrict certain information to certain groups, and create a friend hierarchy.