People doing interesting things with data gets me all hot and bothered. So reading about a man who is planning to make all the publically available data from Facebook into giant graphs got me quite excited.

Pete Warden, is interested on using social graph analysis to help solve world problems. His graphs use information from public Facebook to create maps, graphs and patterns about where people live, what they like and who they’re friends with.

It’s a little difficult to explain why knowing that someone who lives in Washington likes beer is so interesting, but think of it like this: if you know what all Facebook users in Washington like and can compare it to Kansas City or LA you start to build some interesting comparative data.

Working with only the names, hometowns, fanpages and friends of Facebook users, Pete Warden has already managed to do some fascinating things. Take this map: it shows where people have friend connections and divides America into seven clear areas. 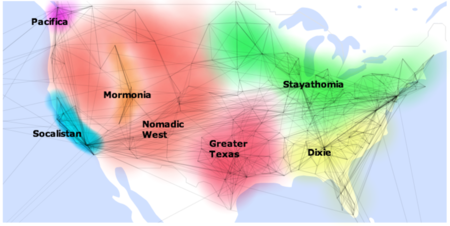 Those areas have clear distinguishing features. From Pete’s blog:
“In almost every state in the Southern U.S., God is number one most popular Fan page among Facebook users. Among people in the L.A., San Francisco and Nevada regions? “God hardly makes an appearance on the fan pages, but sports aren’t that popular either,” Warden writes. “Michael Jackson is a particular favorite, and San Francisco puts Barack Obama in the top spot.”
Read more weird insights into America on his blog post here.

Facebook is sitting on a motherlode of information about its 350million+ users: it knows what they like, what age they are, how well educated they are. Compiling all that information would be like getting the results of a global census. Think of what you could do! You match work out how likely Metallica fans were to have been in higher education compared with Britney Spears fans. And thousands of other things. The ways you could chop the data is phenomenal.

Pete Warden is releasing the data he has found out to the academic community – expect some interesting uses of it to trickle out in the next few months..