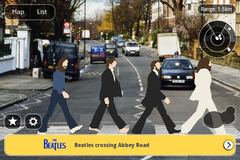 As regular readers know we are huge fans of the Augmented Reality app Layar. In case you missed it Layar lets you overlay a layer of digital content over external reality as seen through your phone’s camera. Point your phone’s camera at a street/building/person, and on the screen, information about what you’re seeing is overlaid onto your view of it.

With Layar any developer with a bright idea can add their own layer of content. There’s a Wikipedia layer for location-tagged Wikipedia entries, a find-an-available-house layer called Funda set up by an entrepreneurial Irish developer with an interest in property, and a bank has done one marking all nearby ATMs.

Layar was a huge success on the Android platform and late last year became available via the iPhone too. Unfortunately for the Dutch developers of the service thiungs have gone a little awry since then.

On December 18th Layar’s developers announced on the company blog that it was pulling version 3 of the service from the iPhone app store.

‘ We had issues already since the very first launch of the iPhone app. Unfortunately these issues were due to bad memory management decisions right from the start, something that we could not easily fix without completely re-engineering the app. There is some old code in there that is buggy and we don’t know exactly where the bug is. Since the app worked fine for 80% of the users (and on all our testing devices), we decided to move on to v3 before we would rebuild the framework of our app. We’ve tested v3 thoroughly internally and did not have any issues with crashes when submitting to the App Store. In fact, we still cannot reproduce the crashes that many of our users are reporting right now.

The percentage of users with crashes has grown too much with the launch of v3 to justify keeping the app online. We don’t want our users to be confronted with an app that is unusable due to systematic crashes. We take great pride in our product and are very serious about delivering high quality to our users and our developer community.’

So a very honest statement which will bring little comfort to some very dissappointed developers and new iPhone owners. However the post said that the app would be back in weeks rather than months and that doesn’t now look like it will be the case.

It would be very sad if what has become the poster app for AR on the iPhone doesn’t return. Has anyone else had issues with Layar on the iPhone? Also what other AR apps cut it for you?