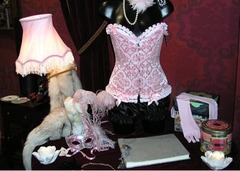 Do sex toys make you want to stay in your room all day, forsaking the company of humans beings to spend quality time with your battery-powered silicon pleasure instrument?

A certain Joe Vetter fears that that is exactly the effect that vibrators have on women and he is protesting against a university study into the attitude of women to sex toys on that basis:

Fair enough – he is the representative of the Catholic church in Duke University in North Carolina but his attack on the research project seems a little misplaced.

Student health workers and a behavioural economist in the college are studying female attitudes to vibrators and sex toys by getting students to look at sex toys, discuss them and then giving them the opportunity to buy toys at reduced prices.

They are investigating whether increased access to sex toys reduces promiscuity among young women. You’d have thought the Catholic Church would be in favour of this sort of thing, but if Joe Vetter is representative, it’s fair to say that they’re not.

I think the take-away message from this gentleman is roughly: why don’t you go out and have demure non-sexual relationships with young men who you might be lucky enough to marry later.

[via Katie Drummond at TrueSlant]