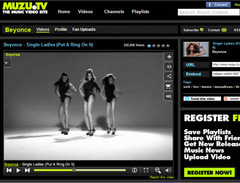 A British start-up have launched a Spotify of music videos on similar principles to the successful music-streaming site.

Muzu.tv have signed licenses with the big labels – including Universal and Polydor – and then let you watch official music videos for free online. They pay for it with advertising, banner ads and wraparounds on the screen and every five songs there’s 15 second video advert inserted in. Ad revenue is shared 50/50 with the artist and label.

Youtube used to be the site where you once wasted hours watching Girls Aloud music video after music video – but since Youtube removed masses of license-infringing content from its archive, and Spotify launched, people have been listening to music on places like Spotify and watching music videos elsewhere.

Muzu could dominate pretty quickly in this field, it’s a nice format, videos are available in high quality if you want, and it slides automatically into other songs by the same artist so it gets quite addictive.

Unlike Spotify, it’s not an app, it’s a website and you don’t have to register to get the content.

From a quick glance it seems like the offerings are largely chart-heavy but thanks to a deal with Merlin which represents hundreds of independent labels, there are quirkier indie videos on there too.

Sexiest Music Video of all time
As an interesting little way into the site… they recently did a poll of visitors who voted on what the sexiest music videos of All Time are. Britney in Toxic is number one – obviously a lot of people have airhostess fetishes. Poll results below, up to you to judge: