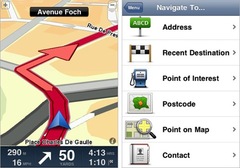 If you’re an iPhone user with a poor sense of direction and a proud streak that prevents you from stopping to ask for directions, then sat nav applications could come in handy.

TomTom has finally announced a sat nav application for the iPhone, but has lost in the race to become the first manufacturer to do so. We take a look at the other two that beat this sat nav giant to the iPhone post.

CoPilot Live, launched earlier this month, is said to work with all UK postcodes, or alternatively the house number and street name, to get you exactly where you need to go.

Like with standalone sat navs, drivers will get features including lane assistance and speed limit alerts. If you want to wise up about the weather before you travel then you can also use your phone’s internet to link up to “Live” services such as a 5-day weather forecast and later this year, real-time traffic information will be available too. It costs a one off £25.99.

The Navigon Mobile Navigator, launched last year, is said to have all the standard sat nav functions such as distance and time to destination. However it also has some “special extras” such as the company’s Reality View Pro, which gives traffic updates in realtime and Lane Assistant Pro, which shows the junctions on tricky roads. It can also optionally display POIs (points of interest) along the route. The application costs £55.

The TomTom application, available from iTunes, is available for both the 3G and 3GS versions of the iPhone and gives users maps of either Europe or UK and Ireland. It also has many of the features included in a standard TomTom sat nav including IQ Routes and safety camera position.

The application costs £60, which is more than the other two, but we are pretty sure the war of the sat nav applications aren’t yet over.