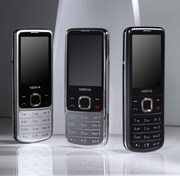 Do you remember the Nokia 6300? Yes, I realize we’re talking 2007 now, but try and cast your mind back to that distant year. The 6300 was a really popular model for Nokia, in part due to the fact that it embraced their ethos of function over form, and also due to its easily navigatable menus and musical interface. We told you about the 6700 back in January, and now we can confirm this baby is hitting the marketplace soon.

The 6700 is the newer, shinier older sister to the 6300, who has returned home form university with a degree in drinking and a penchant for fine art. It takes the specs of the 6300 and overhauls them, so you’re looking at the familiar candybar interface with a whole lot of goodness hidden behind the 2.2 inch screen

You’re getting a 5 megapixel camera with LED flash, that’s backed up with assisted GPS and Nokia Maps (think geo-tagging). You also get 170MB of internal memory (expandable up to 8GB via Micro SD card). The phone utilises GPRS, EDGE and has HSDPA at 10Mbps, but sadly there’s no 3G included.

What you do get however is the use of the newly opened Ovi portal, which lets you download a variety of apps to play with.

One thought on “The Nokia 6700 gets a June release date”