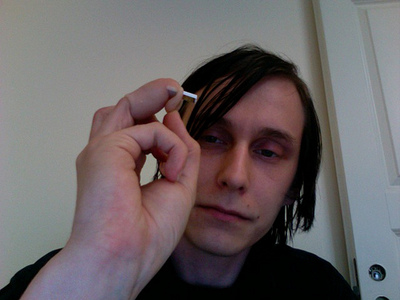 Remember when you were an unsuspecting young whipper snapper and your granddad thought it was a good idea to freak the hell out of you by pretending his thumb had been detached from it socket? Well, for this unfortunate person, everyday is a thumb finger trick day (what a great way to freak out the kids). This ill-fated young man lost part of his finger in a motorcycle accident, and being such a fervent hacker had his prosthetic finger fitted with a 2GB USB key, giving him some serious geek cred.

He certainly gives a whole new meaning to the term ‘plug n play’. When he wants to make use of his USB finger, he simply pulls it off and plugs it in. Sadly, that’s about all the power his prosthetic finger holds – he won’t be able to do the kind of things seen in sci-fi movies like downloading information directly to his brain. But if he has another accident, who’s to say the doctors can’t make this happen. Of course, I don’t wish that upon him.