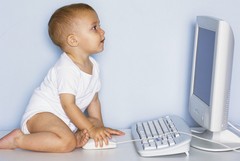 When I was at primary school we only had one computer, which we took turns with in ten minute increments. High school was a little better as it featured a bank of computers hooked up to the intranet, but though we may have become proficient-ish at Word and Excel, using the net was still something you had to discover at home.

Kids of today may have it easy in the fact that they’re connected to the net 24/7 and the world of social media is seen as a natural progression rather than a baffling new world of terms to learn. But do they really need to study Twitter and Facebook etiquette during school hours? Former Oftsed chief Jim Rose thinks this is just what kids need to be doing, and whilst it may make them sit up and pay attention, is it really sensible to school them in this?

Firstly, whilst it’s important to be web savvy if you want to survive in today’s changing market, is it really necessary for under elevens to have their social media skills highly polished? If they spend this much time communicating virtually, what happens to developing their interpersonal skills- in person? Shouldn’t they be concentrating on group activities that take place without an intermediary computer?

Next, whilst Facebook and Twitter may be buzzwords right now, we’ve seen many networks rise and fall in the last few years, so will training them on these systems mean they’ll be well versed in obsolete networks by the time they’re in a position to utilise them professionally?

And finally, should they be studying web tools in lieu of actual education? The proposals seem to imply that the 2nd World War and history of the Victorian age will no longer be highly valued on the curriculum, with Wikipedia placed way ahead of it in priority.

However, it’s not all bad news, as the change to the syllabus means that teachers get more of say in what to teach their class- and as they’re the people who understand the pupils best, it could mean we’d start seeing youngsters educated on a more personal level, with classes tailored to engage their interest.

It’s great that web based skills are being seen as important, and being a required part of education, but they need to be done in conjunction with the existing status quo, rather than replacing it.

Zara Rabinowicz edits Shiny Shiny and thinks she could do with some lessons in updating her Facebook status.