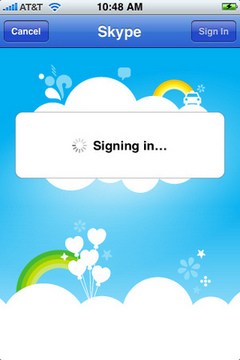 When the clock strikes midnight tonight, it will mark the beginning of a beautiful (and free) relationship between iPhone users and Skype. Blackberry users however, will have to wait until May for the app to land on their handsets. It is reported the iPhone app will permit Skype users to call each other via their phone’s WiFi or 3G connection, completely free of charge. It’ll also be compatible with the microphone equipped 2008 version of the iPod Touch.

The app shares the iPhone’s existing address book, so there’ll be no need to create a separate list for your Skype pals – it’s part of the package. The green light hasn’t been given for video calls, but this is something Skype is considering, which would ultimately change the face of mobile communication as we know it and would finally give us a reason to make full use of those secondary cameras that comes bundled with our latest handsets.