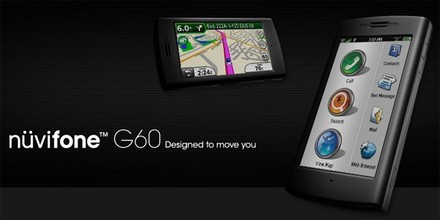 Garmin and Asus have finally made good on all their promises, by finally getting it together and offering us up a co-branded handset. They say that the G60 will be the first in their nuvifone range, with the second due to be showcased at MWC later this month. We’ve been waiting for this for a while, but will it impress or disappoint?

They’re suspiciously low on any definite specs, but we can see numerous pictures of it in action. Typically it looks very similar to their sat nav devices, so Garmin users should find the interface simple to use. There’s no word on what OS it will have though, so Windows Mobile is probably a likely bet. You can look forward to a 3.5 inch touch screen (my, how the market likes to copycat) and they’ve hinted it will contain a selection of Google apps as well.

I’m guessing this will be the usual one click YouTube uploader/Flickr etc features we’ve come to know so well, with the focus being on the integrated AGPS qualities. You can expect voice navigation, preloaded maps, and 3G connectivity (hopefully).