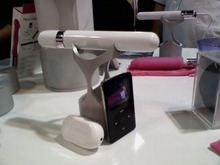 I realise the title has pretty much given the game away (c’mon how could you not quote a press release like that?) but I’ll elaborate nonetheless. We’ve mentioned the OhMiBod Boditalk which vibrates in time with your mobile phone, but this is a new kid on the block, that will buzz in time to your MP3 player (including the iPod AND iPhone). Simply plug in the wireless adapter into your MP3 player and play your choons as you normally do, and the FreeStyle will start to buzz.

This means not only can you *erm* enjoy your favourite music, you can also create a sexy ambience, and even create naughty style playlists…

It should be available around March, but so far we have no official word on release date or pricing.

See her for more naughty toys