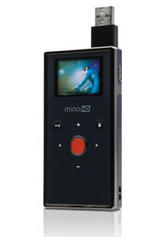 The Flip Mino has been an office favourite for some time now, so the news of the Flip Mino HD caused waves of excitement. Though it’s only available Stateside at the moment there are rumours it will hit our shores, and when it does you can look forward to a 1.5inch TFT screen, with upgraded memory.

There’s now 4GB rather than 2GB as on the Mino Ultra, and video resolution is higher as well at 1280×720 (hi def) instead of 640×480. As with all Flips you can charge with the integral USB connector and upload your footage straight to YouTube or MySpace with one click. You can capture approx and hours footage on the Flip HD, and it has been upgraded to be especially sensitive in low light conditions.

It weighs in at a mere 3.3 ounces and has eight touch sensitive button for navigating the menus and various options. There’s also a child safety mode to prevent favourite clips accidentally being deleted and they’ve expanded the compression engine to create better sound and image quality. For a pocket sized piece of equipment it looks pretty decent, and you can customize it with their array of stick on decals.