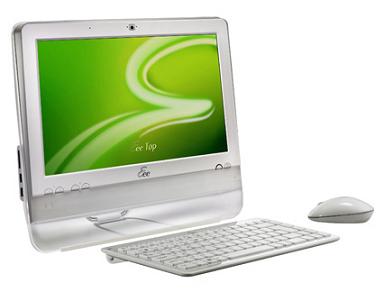 The Eee pc which spawned a generation of little low cost, no frills laptops has just added a desktop addition to its Eee PC range – the Eee Top. First things first, it’s a 15.6-inch touchscreen – that’s 15.6-inches of touchscreen goodness – so if using a mouse is all a bit irritable, or using a keyboard as less as possible has mass appeal, I’d read on.

It’s one complete unit, with single rather than multi-touch navigation – so one finger at a time. The Eee Top offers the full functionality of a desktop PC but in a much more entertaining shell, all accessible at your fingertips. Connectivity is aplenty with six USB ports, a 4-in1 card reader, 1GB RAM and 160GB of storage, all running pretty speedy on a 1.6GHz Intel Atom Processor. It also features Express Gate, that paves the way for an internet boot time of just 8 seconds. It also runs on a Windows XP operating system so therefore packs all the usual XP OS based features.

Other specs include a 1.3 megapixel webcam with microphone, WiFi, integrated high-fidelity speakers, and built-in Eee Cinema for home multimedia centre use. Its design is nice and slim too, measuring 42.5mm, so it won’t take up too much room and make you wish you opted for a laptop instead.

It’s not out until next year and the only way to get your hands on it would have been to attend the Stuff Live Show over the weekend. So with that opportunity missed, you’ll have to wait until 2009.

Expect a Shiny preview at some point in the week.

Check out the latest eco-friendly laptop from Asus here