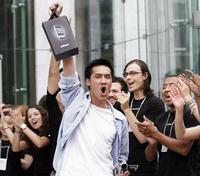 Pity the poor wife who found raunchy photos of her husband emailed from his iPhone to some hussy, and had to go to an iPhone forum to find out the truth. When she confronted her husband, he said that although he’d take the photo there was an Apple bug which randomly attached pictures of penises* to random emails, making them appear in sent folders although they were never sent.

Cue Poor Wife posting to a forum to ask if anyone had ever experienced this problem. Imagine her delight when not one but two people responded saying that this was a definite bug, and that not only had they been affected, but their colleagues had too!

Imagine her disappointment when another forum member pointed out that at least one of the respondents had only just registered on the forum, and had only responded to her. Yep, it was Cheating Spouse in a Disguise.

He was at least considerate to her relative tech newbie status, writing in one of his reponses “Please ignore any of the “troll” answers you’re getting causing you grief. (You can find a definition of troll at www.urbandictionary.com )”. How thoughtful.

*some boob pictures were affected too. Oh, ok. It was random photos