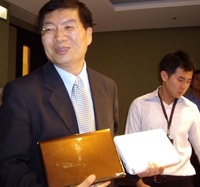 The rather swanky and luxurious S101 is about to get a 12-inch opponent, but unlike the S101, this will fall under the company’s notebook line-up rather than the high end Eee netbook range. That’s because the president of Asus has officially declared he won’t be calling any laptop with a screen size of more than 10-inches a netbook – but we kind of already knew that.

As the 10-inch S101 has already been announced, news of a bigger model is testament to the fact Asus is ridding itself of the tiny netbooks it’s become renowned for.

This model will house a similar design and specs to its 10-inch sibling – so prepare yourselves for another drool inducing beauty. Expect the 12-inch model to be called the ZX series, have 16:9 aspect ratio and reveal itself around the end of the year when we’re all chronically broke from lavish spending over the Christmas period. That’s if the source is to be believed of course.