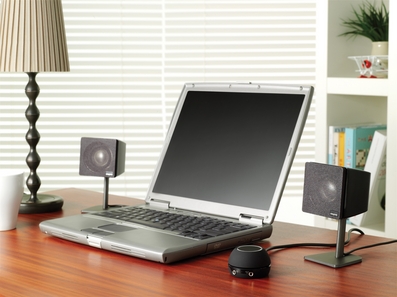 Creative announced the launch of three GigaWorks speaker systems today – the GigaWorks T20 Series II, GigaWorks T40 Series II and the GigaWorks T3. Based on the huge paragraph dedicated to the T3 and the 2 lines allocated to the T20 and T40 in the press release, it’s fair to say the T3 is the one Creative really wants to grab your attention with. Not to stand in the way of the intentions of a press release, it’s the T3 up first. Looking like an impressive piece of kit, the T3 is a 2.1 speaker, combining innovative design with what Creative are calling ‘the best audio components and state-of-the-art technologies’, to deliver a sound that’ll raise your listening experience to a whole new level of fantastic-ness and produce a sound any audiophile would be proud of.

To ensure the bass is deep, the T3 comes with a subwoofer, three drivers and bass compensation knob. It also gives back to the environment by featuring low standby power technology that’ll keep power consumption to a minimum when in standby mode. It’ll be available in September for 199 Euros.

The T20 and T40 speakers are both upgrades of the original GigaWorks models first showcased at IFA last year. The basics haven’t changed, as in they’re still both speakers designed for PCs/Macs that aim to deliver good quality sound without a subwoofer. The only thing that seems to have changed (based on those 2 lines) is their acoustic capabilities and design has been refined. The T20 and T40 will be available in October for 99 and 129 Euros respectively.

One thought on “Shiny at IFA 2008: Creative lines up three GigaWorks models for audiophiles of all kinds”